It’s not often that a true prophet of God ends up having prophetic egg on his face, but just that had recently happened to Jeremiah.  In Jeremiah 28 a prophetic wannabe named Hananiah delivered what he declared was a true revelation from God.  Hananiah made wonderfully sunny promises about Israel’s being released from captivity very, very soon and that God would very soon break the necks of the Babylonian leaders who had taken the Israelites into captivity.  Jeremiah heard these words and essentially said, “Amen!  May it be as you said!”

Problem was, Hananiah was just making all that stuff up out of some misguided desire to be optimistic and hopeful.  So God had to come back to Jeremiah to say, “Slow down there, partner.  That is not my true word.  Repudiate it and then I will give you a new message to say!”  I imagine Jeremiah swallowed hard at this but did as he was told. 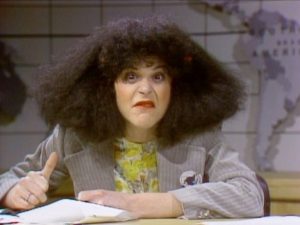 It reminds me of comedian Gilda Radner’s old Roseanne Rosannadanna Op-Ed spoofs on the original Saturday Night Live “Weekend Update” news spot.  As often as not, Roseanne would go off half-cocked with some verbal miscue and would get all revved up and hyper in assailing the topic at hand.  Finally someone would interrupt her to tell her she was talking about the wrong thing, at which point Roseanne would look into the camera and say very slowly “Ohhh.  Nevermind.”  In Jeremiah 28, Jeremiah had to say to the people “Nevermind” and it had to be not at all funny but powerfully embarrassing.

In the 29th chapter, we see the letter Jeremiah wrote to his fellow exiles that delivered to them the real Word of the Lord, the true Word that Hananiah very nearly messed up for the Israelites.  The truth was that this exile was going to last a while.  That was the bad news.  The good news was that God remained concerned for his people.  Yes, God had allowed this calamity to come upon Israel due to their nearly wholesale failure to keep their end of the covenant.  As we saw in another recent lection from Jeremiah, however, God’s allowing all of this to happen and playing a role in it all did not prevent the divine heart from breaking over the calamity.  “This hurts me more than it does you” parents sometimes say when punishing a child and although the child is unlikely to believe that, parents know its truth.  God did, too.

So on the one hand it could strike us as strange—as perhaps it struck the Israelites as strange—that the same God who allowed this exile to take place and who had been condemning his own people for the longest time through the diatribes of the prophets would also show this loving, tender concern for his people.  But if we understand that God’s love was what had been behind everything all along, then this outburst of gentleness and fatherly concern is not so weird or surprising after all.  God was concerned for God’s people.  That’s why God could not allow things to continue in Israel the way they had been going for so very long.

But that’s also why he wants his people to thrive and to not give up even when living as foreign exiles in a foreign land.  Yes, the laments would come.  Diatribe poems like Psalm 137 would be written by heartbroken people who found the songs of Zion sticking in their throats as they wept alongside the rivers of Babylon.  But even so, God wanted his people to not give up, to stay strong, to continue to grow so that when the time was right, God could return these people to their own land, thus ushering in what everyone could only hope and pray would be a better, more God-like era for the nation of Israel.

So God tells the people not to saw off the branch they were sitting on.  It might be a Babylonian branch connected to a Babylonian tree but since this was to be their lot for a good long while, they had to work for the health of that tree, for the prosperity of the city in which they found themselves for the time being.  They had to continue to affirm life, to get married, to have kids, and to remain healthy so that the day could come when they would be well poised to return to their land.

Alas, the Common Lectionary cuts off this passage a few verses prior to one of the more famous of Jeremiah passages in verses 11-13 but there God makes the lyric decree that the plans he has for his people did not end with the destruction of Jerusalem and the carting off of the Israelite nation.  No, God still had plans, and they were really good and hopeful plans, too.   So the people were to have hope, they were to carry on as best they could.  True, the sorrow and the pity of it all could not be erased by even these hope-redolent words in Jeremiah 29.  There would still be rough days ahead—days on which composing a Psalm of Lament was wholly appropriate.

Nevertheless, God had a plan.

Sometimes people quote Jeremiah 29 to us (especially those verses 11-13 that technically fall outside this lection) when we’re in a tough spot.  We’ve been disappointed by life.   Our marriage has fallen apart.  We lost our job.  Some tragedy has struck and it feels like the end of the world to us.  And so someone will come along and say, “Buck up.  Remember these words: ‘For I know the plans I have for you, plans to prosper and not to harm you . . .”  And sometimes upon hearing that part of the Bible quoted to us, we seriously want to deck the person quoting it.

We worry that by saying such things to us in our distress this other person is downplaying our bad situation, papering it over with smiley face stickers and the like.  Sometimes, of course, that is the case, too, and we are right in those situations to ask that this miserable comforter give us our due in acknowledging what is genuinely painful for us.  But at other times quoting Jeremiah 29 is more than just well-meaning: it is the dearest truth.  It reveals something of who God is.  It reminds us of the real plans God has for not just us but ultimately for his whole creation.

In a way, Jeremiah 29’s words of encouragement to even people in exile are an anticipation of another famous verse that would be written down some centuries later: “For God so loved the world that he sent his only Son . . .”  God is on the side of life.  That’s good news for all of us who feel the pain of life’s diminishment now and then.

Lewis Smedes once wrote that we should avoid being fake or hypocritical and just admit that deep down what each one of us wants is some enjoyment in life.  Deep down we hope that the day may come when people will stand up and cheer over something we did.  We want the bells to ring and the Hallelujah Chorus to sound for us, too.  Smedes even said that anyone who claims otherwise, anyone who says he could care less about whether or not anything good ever happens to him, such a person is not only being dishonest but is probably a bit of a nasty person, too!  Most of the people I’ve met who claim they don’t care about being happy have tended to be pretty good at spreading their unhappiness around!

Our great God created us for joy and one day, as C.S. Lewis predicted, joy itself will be the serious business of what heaven is all about.  As Jeremiah 29 can remind us, God sees us in all those times of our lives when we are less than joyful—indeed, he sees us in all those times when we are dwelling in the place that is very nearly the opposite of joy and flourishing.

Whether or not we emerge from such sad places sooner rather than later—indeed, whether or not we ever arrive in this life at a place called pure joy—the fact is that God desires flourishing for us and for the whole creation.  God wants us to prosper.  Knowing that may not eliminate every sorrow or dry every tear from our eyes but this knowledge about who God is and what God desires for us is more than a little hopeful.  And surely we are grateful for any piece of legitimate hope we can find.